BC Oil and Gas, Central BC, Construction 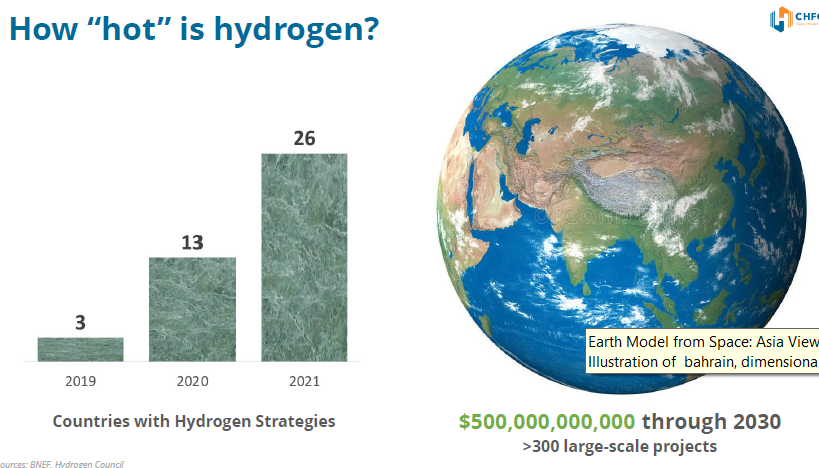 The use of hydrogen as an alternate means of powering land-based vehicles has been talked about ever since the 1960s, when hydrogen fuel cells in rocket engines lifted the Apollo missions to the moon.

Hydrogen’s profile took another giant leap in the mid-90s during the Dot.com era when internet-based startup companies touting fuel cell technology teased investors, but failed because it wasn’t economical.

But now, with weather- and climate-related disasters threatening the world with greater frequency and exponentially more destructive power, and governments grappling with ways to reduce carbon-based greenhouse gasses and meet zero-emission goals, hydrogen is back in the forefront as a possible saviour to the planet.

“The reason hydrogen has become topical again is that starting about three years ago governments went from saying we’ll try to reduce emissions by 20 or 50  per cent, they got ambitious and said let’s aim for net-zero,” Matthew Klippentein, executive director of Hydrogen BC.

“If you want to reduce emissions by 20 or 50 per cent you probably don’t need hydrogen, you can do a lot by getting by building a bunch of renewable anergy (incentives) and getting people to switch to battery-powered. But as soon as you go to net-zero, for substantial emissions reduction now suddenly you need a lot of hydrogen production.”

As regional director for Western Canada for the Canadian Hydrogen and Fuel Cell Association, Klippentein has made it his business to keep hydrogen in the conversation and his company oversees advocacy, marketing, communications, and government relations for the sector. On Thursday afternoon he will moderate the Hydrogen, Now and to the Future panel discussion at the BC Natural Resources Forum at the Prince George Civic and Convention Centre.

The panel will include Jessica Verhagen of Hydra Energy Corp. In September, Hydra Energy broke ground on its Prince George hydrogen plant on a five-acre site on Sintich Road, which will be used to refuel transport trucks converted to run on a hydrogen/diesel blend, which burns more cleanly . When complete in 2024, the plant will produce 3,350 kilograms of hydrogen per day and its four-bay refuelling station will have the capacity to refuel 24 trucks per hour.

Truckers driving converted vehicles can still operate on straight diesel at any time and Klippenstein said that eliminates the pitfalls of driving a fully-electric vehicle and worries about range, location of charging stations and the lost time needed to recharge.

“Theirs is a solution which I think will have a lot of adoption,” said Klippenstein. “On a cost-per-kilometre  it’s supposed to be cheaper than straight diesel, they reduce their emissions and if anything goes wrong with this new hydrogen system the diesel engine is there to take over.”

Hydrogen is most commonly made using natural gas when making ammonia for fertilizer. It also comes from using electricity to split water molecules apart in a process called electrolysis. In a fuel cell, the hydrogen atoms are collected at the anode and stripped of their electrons while the positively-charged protons pass through a membrane to a cathode. The negatively-charged electrons are forced through a circuit to generate electricity, and that produces water and heat.

Most of Canada’s hydrogen is made in Alberta, where the biggest fossil-fuel refineries are located.

“Hydrogen is really the only way to get that renewable energy exported to the world,” said Klippenstein. “You use renewable wind and solar energy and, in some places, nuclear to make the hydrogen and most likely you turn it into ammonia and use trains to get it to the coast and then you move that ammonia around on big ships.

“It’s a new way of harnessing more value from our natural resources in a climate-friendly way.”

Spurred by carbon taxes imposed on businesses and the need for net-zero emissions, Hydrogen BC forecasts that Canadian investment in the clean hydrogen industry will grow from $200 million in 2018 to $47 trillion by 2050. With that growth comes a corresponding increase in job potential for the country, from 2,000 employed in 2018 to 358,000 by 2050.

Fortis BC, the province’s natural gas and electricity provider, is also looking at ways to reduce carbon emissions to conform to government requirements and Klippentein sees hydrogen as a big part of the solution.

“Really, the only way to do that is with hydrogen,” he said. “You can make renewable natural gas but given the amount of gas we use in B.C., instead of heating our homes in winter with natural gas  we will be heating them with clean hydrogen, in the longer term. The question is how to get there.

“I think with the province aiming at net-zero in 2050 or ideally sooner, my guess is that they would either build a twin hydrogen transmission network or they would retrofit their existing network of pipelines to be able to accommodate straight hydrogen. It’s a fascinating time in that sector.”