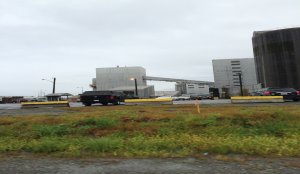 In a statement, Ralston said he toured LNG Canada with Haisla Chief Crystal Smith who later hosted the minister in Kitamaat Village.

About the tour, the minister said he spoke with workers about how the project is providing good-paying jobs, supporting the local economy, and will be one of the lowest-emission LNG producers in the world.

“I’d like to thank Chief Crystal Smith for spending her valuable time, sharing her stories with me, and hosting us at Kitamaat Village, where I saw ways that the Nechako-Kitimaat Development Fund is having a direct impact.

The Nechako-Kitimaat Development Fund (NKDF) has provided more than $12M across the north, making communities better for people who live, work, and play there. The fund was created in 1999 after the province and Kitimat-based Alcan (Rio Tinto) each contributed $7.5 million.

Smith said Haisla Nation was pleased to have the minister and his team reach out to them.

Smith also said it was good to see the minister getting directly caught up on the project and hearing some of the issues that the project and the communities are facing and being genuinely interested to see progress and continue to work towards solutions.

Ralston was given a peek in to Haisla’s latest energy project Cedar LNG, which was a big part of the discussion, said Smith.

“It was great for him to see the employment aspect and everything that we’ve been able to accomplish this far with other revenues and our economy, ” Smith said.

She said the minister received finer details of the challenges the project is facing, adding, the First Nation is looking forward to the province’s support and collaboration in working towards economic reconciliation for the Haisla with Cedar LNG.

Ralston also visited the newly constructed youth centre in Kitamaat Village. The $7 million building opened its doors on July 6 and was constructed with sustainable engineering, keeping in mind rising sea levels and the community’s proximity to the water.

Smith said the Haisla Nation is working towards more buildings and infrastructure that that will go in line with objectives of reducing emissions and utilizing recycled items as much as possible.

Ralston, who is the minister responsible for energy, mines and low carbon innovation also said he was pleased to see an electric heat pump installed at the building in a northern community. “(It) shows that this technology works in northern communities,” Ralston tweeted about it later.

Following the tour, the minister met with District of Kitimat Mayor Phil Germuth and council to discuss economic opportunities for Kitimat in the province’s planned low-carbon future.

“I am pleased to learn Kitimat’s desire to expand electric vehicle infrastructure and value chain, as well as the district’s efforts to improve energy efficiency in the building sector,” Ralston said.