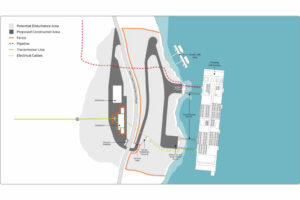 The public comment period for the Cedar LNG project’s environmental assessment is now closed, but concerns remain the assessment has not properly considered all of the potential environmental impacts.

Just prior to the closing Oct. 14 at midnight, the group Douglas Channel Watch urged the public to weigh in on the project set to take place in Kitimat, citing concerns it does not properly account for all greenhouse gas emissions.

“It’s our opportunity to take a look at these projects and make comments to them,” said Cheryl Brown, a resident of Lakelse Lake and member of the Douglas Channel Watch.

The Douglas Channel Watch says the province’s assessment for greenhouse gas emissions considers only those that are produced from the facility itself.

The assessment does not include upstream emissions – those that leak into the atmosphere during fracking, and from pipelines that transport the gas to the facility.

These emissions are often the largest, accounting for 79 per cent of the project’s carbon footprint in B.C., the organization asserts.

“There are lots of technical reports that look at whether or not a facility qualifies to actually do the upstream assessments. From our point of view Cedar does and yet it’s been exempt from it,” Brown said.

“We as a group are concerned about the climate impacts,” Brown said. “The bottom line is there really needs to be a full assessment.”

The Cedar LNG project has been previously praised for its partnership with the Haisla Nation and is quick to point out on its website that it has gone through the proper environmental channels.

Despite this, Brown says that there must be more accountability.

“If the upstream assessment isn’t considered, it sets a precedent for other projects that are going to be coming down the line that want the same treatment,” Brown said.