BC Oil and Gas, Northwest BC 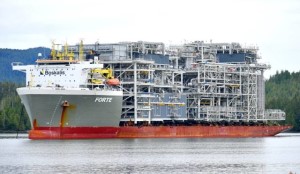 Kitimat residents can look foward to the sight of natural gas being flared off into the atmosphere as LNG Canada comes closer to finishing its mega-billion project to export a super-cooled and liquefied version of the fuel overseas.

Expected to begin in late 2023, flaring is the planned burning off of excess natural gas and is being described as a key part of production readiness, an LNG Canada official told The Terrace Standard.

“Flares are a safety system but they also are an integral part of starting up, they’re a big piece of maintenance. We need people to understand and not be surprised when that starts,” Teresa Waddington, the company’s sustainability and asset manager, said in an interview.

Paul Hagel, communications manager for LNG Canada said the company is doing the work of talking with residents about impacts of the project, before, during and after next year’s peak construction phase. With that in mind, on Oct. 3 LNG held its first in-person public open houses in both Kitimat and Terrace since the pandemic started three years ago.

The company’s rotating on-site workforce will increase to 7,500 workers next year, a number that rivals Kitimat’s population of around 8,236 people.

“The first few years were really about clearing the area and then groundwork and preps. Now we’re talking about going vertical so it’s going out of the ground and into those huge modules and hooking them up,” said Waddington.

“We’re really ramping up construction and the onsite workforce in Kitimat is going to continue to grow.”

Some area residents, especially in Kitimat Village, might also notice changes to the skyline as the project begins to “build up.”

“The goal of this is really to make sure that we’re able to transparently share where we’re at and what to expect. That’s pretty important because it can be a bit noisy,” Waddington said, adding that once the terminal is up and running smoothly its operations will be relatively quiet, more predictable and less disruptive.

“We’re getting people ready for commissioning, which is going to look different. Residents are used to what construction looks and feels like. When we go into commissioning that’s going to be a different look and feel.

“The noise will shift from construction noise to commissioning noise. The project goes through these different stages and then finally after commissioning there’s startup and normal operations.”

Waddington explained that after the construction phase and mechanical completion, the natural gas processing terminal moves into the commissioning phase, which is the first startup and test of each system.

“In our case commissioning is making sure everything is ready for startup, has been tested and operates the way it needs to operate so as to be safely started up.”

Commissioning can include things like introducing nitrogen to test that instrumentation is working, Waddington said. It can include test filling of hydrocarbons to be sure things are operating well and this is done on one section at a time.

“When you’re ready to start up you move into normal operations. So these are things that people will notice.”

The company has committed to a two to one offset for environmental impacts and those impacts also change over the course of bringing the project online, which means new permitting requirements.

“So, for every metre [of land] destroyed we have to offset with two metres of habitat. Our team of biologists and the contractors that we work with are key in not just designing and building high quality habitat but also doing the monitoring,” said Waddington.

“We have our permits going out for consultation in some areas so when construction is done and in operation the plant will have different impacts.

“We’re going for things like our waste discharge authorization for air and effluent so basically setting the extremely stringent requirements for anything we emit into the air, and for water effluent, so what kind of water quality we discharge.”

Waddington said they’e actively looking to train and hire people locally. Local contractors are also favoured. So now’s the time to get in on the action.

“There is no LNG industry in Canada so we understand that we’re not going to find a lot of experienced LNG folks. If you’re interested in working for LNG Canada, we hire for character and we train for skill,” Waddington said.

“You don’t have to have previous industry experience and our doors are open for all kinds of people.

“We want to work with locals and with Indigenous people to help change the face of industry and make LNG Canada really representative of the community.”