Central BC, Government, Northeast BC, Northwest BC 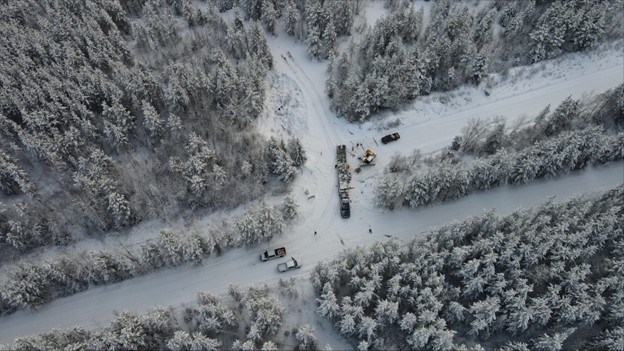 Matt Wilkins left his home in Prince George early in the morning of Dec. 23, hoping to drive to Calgary that day to be with his kids for Christmas.

He didn’t make it.

Wilkins was among the first motorists who came upon a fatal accident scene on Highway 16 between the Mount Robson Provincial Park and the B.C.-Alberta border which closed the road for eight hours while police at the scene waited for an RCMP accident reconstruction specialist to arrive from Williams Lake.

The accident happened on one of the many stretches of rural mountain roads where cellular signals are nonexistent. Fortunately for Wilkins, a transportation manager for Overland West Freight Lines, he was able to get turned around in the deep snow and took the alternate route to Alberta through Kamloops.

Many of the other drivers who were stuck on the highway were not so fortunate and had no choice but to remain stuck in their vehicles in the minus-30 C cold for most of the day until the road was cleared. Before he left the scene, Wilkins took messages from other drivers to relay to family members or work associates once he got his cell signal back to let people know why they were being delayed for so long.

Wilkins knows the roads in and out of Prince George well and wonders why there are so many dead spots on the cellular network. He says there’s a real danger for people in vehicles, especially in winter conditions, if they slide off the road and disappear into a snow-covered ditch and are unable to call for help when there’s no cell signal.

He wonders why government and other regulatory authorities can’t force the major cellular companies to fill in the gaps in cellular coverage on major highway routes, especially considering Canadians pay among the highest costs in the world for cell service.

“When I think about Rogers and Shaw mergers and the CRTC assigning  bandwidth to new carriers or stuff like that, I would like to see coverage mandates,” said Wilkins. “I think the federal government would do well to step in, whether its with some funding or other incentives on major highways, specifically the Trans Canada and Highway 16. Really, there should be coverage coast-to-coast.”

The province in 2022 allocated $14.9 million to its Connecting British Columbia program which will fund expansion of cellular networks and improve connectivity along highways. There’s enough money in the fund to connect 532 highway kilometres and 33 rest areas along  what is known as the Highway of Tears – a 425 km stretch of Highway 16 from Prince George to Prince Rupert.

John Rustad, MLA for Nechako Lakes, travels extensively in northwestern B.C., and  knows there is plenty of room for improvement in the cellular network, especially in the sparsely populated areas. He does recognize improvements cellular giants Rogers and Telus have made over the past decade to connect Highway 16 West.

“What I’ve noticed is there used to be really good coverage I some areas and then no cell coverage in other areas, and what it’s boiled down to foremost of our highways is poor coverage in more areas but at least not as many areas with no coverage,” said Rustad.

“When you’re talking about the Golden Hour for accidents or if there are road closures or other issues and people are stranded and don’t have access to a cell phone they don’t know what’s going on,” he said.

“From a safety perspective we should be able to have coverage along that highway and I just can’t believe it would cost that much. The reason it hasn’t been made a priority is you look at how many votes are there, when you look at remote stretches of highway, well there’s no votes there except where  people travel through there and they have a problem. Unfortunately that drives too many political decisions as opposed to doing what’s right for the safety of people.”

SpaceX successfully deployed thousands of satellites in low orbit of the earth to create its Starlink satellite internet system that is keeping Ukrainians connected with their cell phones and Rustad says that possibility exists that it Starlink could be used to fill in the coverage gaps in rural B.C. where there are so many mountainous areas that block cell signals.

Rustad says with battery technology vastly improved and wind and solar power as potential alternatives, the lack of electrical power for remote cell towers is not an insurmountable problem. He would like to see the province put out a request for proposal to telecommunications contractors to bid for a contract that would provide minimal coverage for 95 per cent of the highways in B.C.

“I don’t want to see taxpayers money got to waste but at the same time, these are safety issues and cold kills far more people annually than warm, and if you get isolated and have no way to call for help, your life is at risk in the middle of winter,” said Rustad.

Satellite phones are expensive to own and it’s costly to subscribe monthly to service providers but there are alternatives. Prince George-Mackenzie MLA Mike Morris, the Liberal shadow minister for public safety, owns a hand-held satellite communicator he carries with him in his truck that allows him utilize satellite networks and his cell phone to send text messages.

“It’s called inReach and there’s another one called SPOT and they work well,” said Morris. “For anybody that travels in remote areas – most of my friends carry them – they have an SOS button you can push and help will come.”

Morris also has a cell signal booster installed in his truck.

“If the signal is one bar, I’ll probably get two or three bars through the booster and extend for a longer period of time,” said Morris.

Morris has also noticed continual improvements in cell coverage in his travels visiting constituents and is encouraged the current NDP government has continued to invest in the Connecting British Columbia partnership program the Liberals initiated when he was in government.

“I’ve talked to Telus and Shaw and Rogers and everybody is working to try and get all the highway links connected, but it’s an expensive process and it’s time consuming as well with all the technicians required for that,” said Morris.

“There’s still large portions of the province when you get up into the northwest and northeast where you don’t have coverage and you can’t call 9-1-1 because you don’t have that service there either. Just in the last three or four years I’ve seen a significant difference. In the next five or seven years we should have all the highways covered by then.”