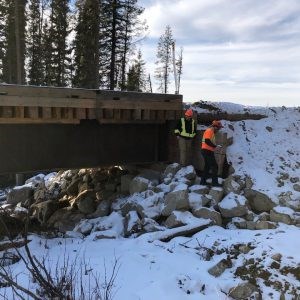 An audit of forestry activities conducted in the Mackenzie region by Canadian Forest Products Ltd., released on Tuesday reveals Canfor did not live up its obligations on bridge construction and maintenance.

The Forest Practices Board study found one bridge was improperly built and 11 others had structural deficiencies the company failed to address. The public has access to all of the bridges identified as being deficient, according to guidelines contained Forest and Range Practices Act and the Wildfire Act.

“The legislation requires that bridges be properly built, so they are safe for industrial users,” said Bruce Larson, acting chair, Forest Practices Board, in a prepared release. “The newly constructed bridge did not follow the plans prepared by a professional engineer and was not safe for industrial use. The legislation also requires licensees to maintain bridges, and, if they find structural deficiencies, the bridges must be repaired, closed to users or have signs posted to limit the weight of vehicles permitted to cross the bridge. Canfor did not follow these requirements.”

As  well as bridge construction and maintenance, the audit examined Canfor’s maintenance and deactivation activities, and its planning, timber-harvesting, reforestation and wildfire-protection practices carried out between July 2020 and October 2021 under forest licence A15384 of the Mackenzie Timber Supply Area.

“Since the audit, Canfor has responded to these findings in a positive and timely manner by rebuilding the first bridge according to the plans, completing bridge inspections and removing four of the bridges with deficiencies,” Larson said. “Canfor is working to address the remaining bridges with the Ministry of Forests and local communities that depend on these roads and bridges for access.”

The Forest Practices Board is B.C.’s independent watchdog which conducts audits and investigations to determine how well industry and government are meeting the province’s forest practices legislation. The board audits forest and range practices on public lands and appropriateness of government enforcement but does not have the ability to lay penalties when infractions are found.

The board’s recommendations have led to improved forest practices to aid government decision-making and have helped encourage better communication among forestry professionals to manage risks to the environment.